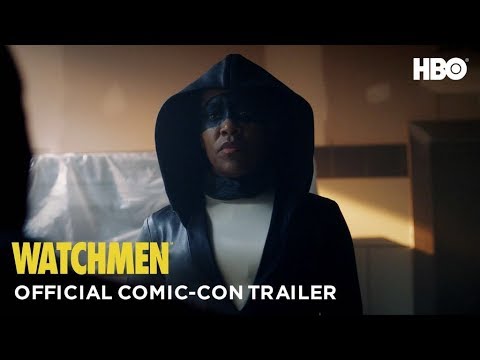 Anther trailer for HBO’s Watchmen series created by Damon Lindelof. This one courtesy of Comic-Con.

“Who am I? If I knew the answer to that I wouldn’t be wearing a mask.”

Huh? Strange line. Generally, superheroes or whomever, wear masks to protect their identity, umm, something they must be aware of in order to ahem, protect. This line sounds like a writer trying to be witty by going into hyper-deconstructionist mode regarding the genre. In other words, someone trying way to hard to be deep but winds up smacking headfirst into the bottom because shallow is all they can muster.

These lines are said while showing images with the words “American HERO story”. This looks like it could be a slam on those who believe in America. That they are a living in a fantasy and that the country is actually ‘bad’.  The narrator (Regina King) goes on to say:

“We know those are pretty colors that just hides what the world really is…black and white.”

We are then shown a close up of Regina’s face (who is black) followed by that of a “Rorschach” acolyte (who is white).

It definitely looks like they have retroactively turned Rorschach into some kind of ‘alt-righter’ and are now going to use his ‘followers’ as a narrative means to attack conservatives by portraying us as a bunch of racist.

Despicable if true…but not surprising given who is behind this series. Of course, I could be wrong ( I really hope I am…I’m so sick of propaganda in entertainment ). Maybe Lindelof just defaults to using white guys as antagonists because he can’t imagine anyone else capable of doing bad things.

Either way, by the time they got around to showing Dr. Manhattan I was too annoyed and bored with everything else to care. I suspect I will be skipping this one, chalk it up to poor marketing.