The superhero genre has fallen into disrepair. Marvel and DC, the two largest producers of such content today, are not producing the quality of superhero fair they were producing even a few years ago. They suffer too greatly from an ideological rot that has been eating them from the inside out for almost two decades. At this point they are nothing but hollowed-out husks distilling noxious fumes and labeling it content.

Sylvester Stallone’s Samaritan is a step in the right direction for the superhero genre, it’s just, unfortunately, not a very big step.

In the film, Sam (Javon “Wanna” Walton), a thirteen-year-old living with his struggling single mother (Dascha Polanco) in Granite City comes to believe that Joe Smith (Stallone), a garbageman who lives in his neighborhood, is actually a superhero believed to be long dead.

Decades ago, two twin brothers were born with superhuman abilities. They were treated as freaks and ostracized by the public. The persecution culminated with the murder of their parents in a house fire set by a mob. One of the twins went on to fight on the side of the law and was dubbed Samaritan. The other, feeling betrayed by society, opted to fight against it. He was called Nemesis. The two brothers became bitter enemies, and both were believed to have perished in an explosion whilst fighting on top of a building.

“The decisions we make add up”

The first act of the film is a bit slow. We’re introduced to several characters, but the events do not feel particularly moving. There was a fair amount of paddling, but the shore still seemed too far away. The film officially kicks off when, Joe Smith, after receiving an injury that should have killed him, miraculously heals himself in front of an excited and vindicated Sam.

“The things you bury tend to haunt you”

The film sets the stage for a confrontation between Stallone’s Samaritan and a group of criminals and Nemesis acolytes led by their ruthless leader Cyrus. However, the true battle in the film is the battle for the hearts and minds of our youth. The beliefs of Nemesis vs the beliefs of Samaritan. It is not difficult to see that a battle, a war like that, is happening right now in our society.

Sam Cleary is presented with these two ideas, these paths to take, and throughout the film, he flirts with both. Cyrus offers him the idea that it is okay to hurt people, to “punch up” in the name of bringing justice and power to the little people.

Joe Smith/Samaritan argues that the solution to society’s problems isn’t as simple as good people and bad people, but the choices that each individual, who is capable of both good and evil, makes.

Sam ultimately has to make a choice between the two. It is a good dynamic, even if its delivery may be a bit on the ham-fisted side.

“If it were only bad people doing bad things, it would be easy to get rid of them.”

The action, while fair, could have used a little more imagination. The chief problem here is that Joe Smith/Samaritan is the only super-powered being in the film. As he is the protagonist, this failing of Hero Theory makes it difficult to create compelling fight sequences that carry weight and provide a satisfactory payoff. Watching Stallone throw thugs through walls and have bullets bounce off of him is interesting for about a minute. After that, it becomes repetitive. This is why it is important to have the heroes’ jeopardy increasingly escalate until the dénouement. You do not want to plateau mid-film, which in terms of the quality of action, Samaritan certainly does. 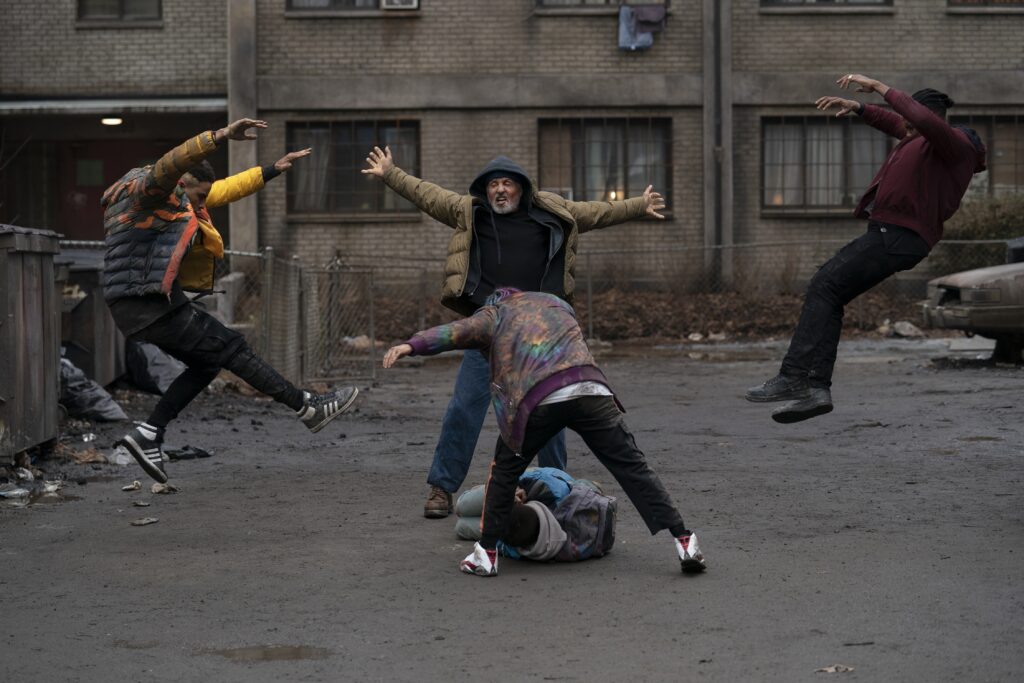 Dascha Polanco as Tiffany Cleary, Sam’s mother, was solid. I felt her interactions with Sam were genuine. She sold being a mother who was just keeping her head above water.

Perhaps one of the weaker elements of the film was Sam himself. Javon Walton made some rather odd acting choices throughout the movie that detracted from many of the scenes he was in, which were a lot. It’s hard to tell whether he was given poor coaching from the director or he decided to go his own way and no one bothered to reel him in.

One of the highlights of the film, surprisingly, was the performance of Sophia Tatum, who played Sil, a close member of Cyrus’s crew. I’ve never seen this actress before, but she seemed to make the most of her scenes. I see a bright future for her in acting.

Pilou Asbæk, had a fairly decent performance as both the intimidating and charismatic main antagonist, Cyrus. That is, of course, when he wasn’t producing ridiculous roars that stood out in scenes like sore thumbs. Not sure what was happening there.

Stallone was Stallone.  I thought his performance was strong, but I think this was the first time I felt him move like a man who was in his late 70s. I fear his action days are rapidly coming to an end.  That being said, it was impressive to see him still getting down after all these years.

I was a little disappointed with the scope of the world-building. There didn’t seem to be any structure made for future films or characters. The way it was outlined, it is pretty much a one-and-done. Which I suppose would have been fine if it was a better film. Had this been an origin story to something larger, we could at least be excited about the possibility of something greater on the horizon. As it stands, we will have to settle with ‘okay’.

Only the good stuff. Personal responsibility.  Standing up for others. Nothing damaging to our youth or society as a whole.

Sylvester Stallone's Samaritan is a solid superhero actioner that, if it had a little more scope and care, could have been an A movie instead of the B- we ended up with.